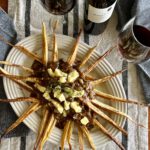 Artichokes are another of the short-season wonders, and we try to eat as many as we can while they are available. This terrific artichoke recipe from Allison Roman's book Nothing Fancy is super easy, and makes the most succulent, juicy, and rich-tasting artichokes ever. It's nice to have a new addition to the 'choke repertoire.

After making this a dozen times or more, I want to encourage you to free yourself from exact measurements, and think instead about ratios. Start with as many artichokes as you plan to serve. I encourage you to make extra while you're at it as they are fantastic cold or warmed up as leftovers.

First, think big as far as your baking dish goes. It's surprising how much space the halved artichokes need for their flat surfaces to touch the pan. From there, just think in terms of having about 1/4-inch of wine in the bottom of the pan around the artichokes, to which you'll add another 1/4-inch of water. (I use Sarver Winery Pinot Gris for this-- my favorite from our neighboring winery!) You'll generously drizzle the artichokes with olive oil, and plop in maybe a half-tablespoon or more of butter for each artichoke half in the dish. Crush as many garlic cloves as you like-- we go big on garlic at this house, so perhaps 2 cloves for every artichoke half, and sprinkle the tops of them amply with kosher salt and red pepper flakes, or my favorite Aleppo pepper.

Aside from prepping the artichokes, the hands-on time is just a couple of minutes. Cover it in foil, bake in a 425 degree oven for 45-55 minutes, depending on the size of your artichokes. Remove the foil from the pan, and assess if it needs a little more water-- you don't want the pan to run dry but do want a reduced glaze to form. Then continue to roast them for another 15 minutes until they turn a deep mahogany, and the cooking liquid reduces into a garlicy little sauce you'll want to dip bread into.

This is the Artichoke Recipe Choice for Part Givers

If you're hosting a gathering, this dish is for you! It can be made ahead, either the day of or the day before, and warmed back up at the last minute. The artichokes are equally charming served room temperature for warm-day entertaining. While the artichokes pair perfectly with most white wine varieties, they really shine served with the same Sarver Winery Pinot Gris they are cooked in.

Have you noticed what happens when a crowd of people eat with their fingers? It's a magical way to drop barriers and bring people together. Put a bowl on the table for guests to toss their tooth-scraped outer leaves into.

What shall I serve with Wine-Roasted Artichokes?

This dish makes a lovely first course, if you like stretching the table adventure out for hours like we do. It's also a perfect accompaniment to fish, chicken, or pork tenderloin. It is equally good as part of a vegetarian meal, served with a nutty rice pilaf or lemony pasta.

This exact technique works to sweeten and juice-up fennel. Give it a try!

Other Springtime Recipes to Try 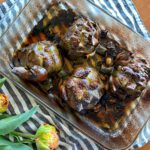 Make it Your Own: Use the same exact process for whole fennel bulbs. Very tasty! Perhaps experiment with other vegetables such as carrots, parsnips, and turnips, altering the roasting time depending on their tenderness.  Dairy-free option: substitute olive oil for the butter.